A while ago, we released the first version of iOS application for Middle Eastern favorite, award-winning daily deal site – Sheeel.com

Our goal was simple – to create natural environment for iOS users to receive notifications about new deals and breeze through the process of exploring and shopping.

Even though Sheeel.com features an adaptive site which performs superb on a variety of devices, iOS handcrafted experience will help users stay in touch with notification system that helps them be the first to get their hands on the great deals from Sheeel.

With the launch of both iPhone and iPad versions you can download for free on iTunes, we are extending Sheeel’s already established identity as an innovative commerce company in the Middle East market.

For those of you unfamiliar with the project, Sheeel.com is a daily deal site based in Kuwait, operating in a number of Middle East countries, and you can learn more about our previous work with them in our portfolio.

iOS powered devices are taking over mobile market in Middle East and to accommodate that growing market and fit users needs, developing an application for this platform was the next logical step in reaching out to ever growing base of new customers and the evolution of Sheeel brand.

How We Built The Application

Since Sheeel’s primary focus is on user needs and ease of access to everyone regardless of the platform and device, the app itself had to be designed and developed with same practice in mind – to allow every iOS user to quickly get notifications for new deals and browse through them without unnecessary clutter.

We researched, wireframed and iterated numerous versions of design. The process involved researching elements and UI patterns that are already in use by iOS applications, how users perceive and react to them and finally applying what we learned to create a great user experience for Sheeel users.

The main challenge to deal with was building an application that can serve both left-to-right and right-to-left layouts in order to fulfil the market needs while maintaining user flow and providing straightforward instructions and calls to actions. Having an experienced team at Inchoo who already worked on projects in the same market made the entire process a whole lot easier.

Repeating steps of research, wireframing and design while presenting and conducting tests with people who were not originally involved with the project resulted in where we are today. It took quite a few number of iterations, experimenting and ideas to get the things where we wanted them and where our test subjects felt comfortable while using the application itself and breezing through the process of exploring the deals and finally making a purchase.

Prototyping the app’s design was a huge part of testing; it helped us to quickly iterate and resolve common problems while using the application and observing how people expected it to behave, which led to achieving the natural user flow in the final iteration. Ideas for features where piling up quickly and gave us insights into what we could include in the future, but we focused on keeping the core functionality of Sheeel as well as its simplicity, rather than spending too much time around nifty features in our user tests. Less is more.

Having color scheme and Sheeel’s strong identity already defined and widely recognized in the region through main website Sheeel.com, we faced quite a challenge blending it with iOS 7 design guidelines and best practices in mind, and the team tackled this with passion. Since we had the features and functionality sealed and tested in our early prototypes that gave us clear and precise answers to usability and behavioral questions, numerous design iterations, experiments and mashups were being thrown out until we iterated the right one that suited the needs of market and it’s users and represented Sheeel’s identity to the fullest. 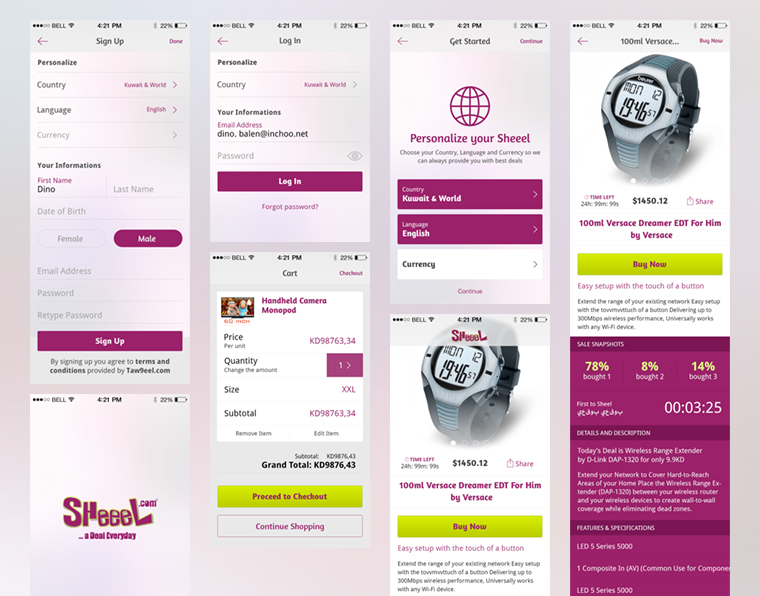 Our partners from Plava Tvornica (Blue Factory) were in charge of the mobile development aspect of the project. They are a Croatian company who have years of experience and excel at building mobile apps. Our design and ideas combined with the team of highly experienced professionals from Blue Factory resulted in a clear and concise workflow which allowed us to build and iterate prototypes quickly and efficiently to create a great user experience.

Nonetheless, versatility of the team involved, their knowledge and vast experience with previous projects in the same market pushed us in the right direction while building the application and adapting features and functionalities for iOS 7 powered devices to the ultimate satisfaction of its end users.

With the launch of the iPhone and iPad applications we have opened up a completely new frontier for Sheeel’s business to grow and attract new customers and serve existing ones using the iOS platform as their everyday tool of choice to get things done quickly and efficiently.

Our process of designing a Magento web store