Office Management‘s job is to organize and supervise all administrative activities required for the smooth and efficient operation of the company. However, Inchoo‘s Office Management crew also manages some internal projects or participates in them. Since the beginning of Inchoo, 8 years ago, the largest internal project certainly was Developers Paradise conference, and I had the honour of being in charge for the organization. We already wrote about the conference, but in this article I would like to reflect more on the organizational aspects and the challenges we faced and how we resolved them.

Developers Paradise is a conference for Magento developers and a Meet Magento Association brand. It has been organized 5 times, once a year, on Spanish islands Mallorca and Ibiza by German company Netresearch, but because of the low attendance and lack of interest of the Magento community for the last event, the conference wasn’t organized for 2 years. We decided to test whether that’ll be true if we tried organizing it this year.

In order to avoid overlapping with other Magento conferences, we were given a date for organizing the conference (end of April), but almost everything else was up to us. Where to organize it and why there, for how many people, what price we’ll put and what it’s gonna be included, and many other issues. We started with the organization 10 months prior the specified term, and the first 3 months we have been working in low profile mode, only a few people knew that we are planning to organize this conference.

Location, location, location! 🙂 Once we decided we want to organize Developers Paradise and after we agreed everything with the brand owner, we started looking for the best location for this event. After we took a variety of reasons into consideration (distance from different airports, accommodation, attractiveness of the location, facilities), we chose Opatija, beautiful old coastal town with developed congress tourism, 180 km from Croatian capital Zagreb and 450 km from Inchoo’s HQ in Osijek. It was also used to be a favourite summer resort for the Habsburg royalty back in the days. We found a great hotel complex with required capacity, but also with a possibility for an increase, just in case. Initially we planned a conference for 100 people, with a quiet hope we’ll go closer to 150. At the end there were 238, but more about that later.

Conference website existed, but we wanted modern and fresh web, so we decided to create a new one. What we did not expect is that we won’t be able to find stock photos (either free or paid) that show Opatija in the way we wanted it, so we took the last minute shot (it was the beginning of September – the end of the tourist season and the start of the rainy season) and hired a local photographer to try to capture what we wanted to. Fortunately, the photos turned out great, we were able to complete the website, announce the date and location of the conference, go to social networks, and start with Early Bird registration. (go fresh) 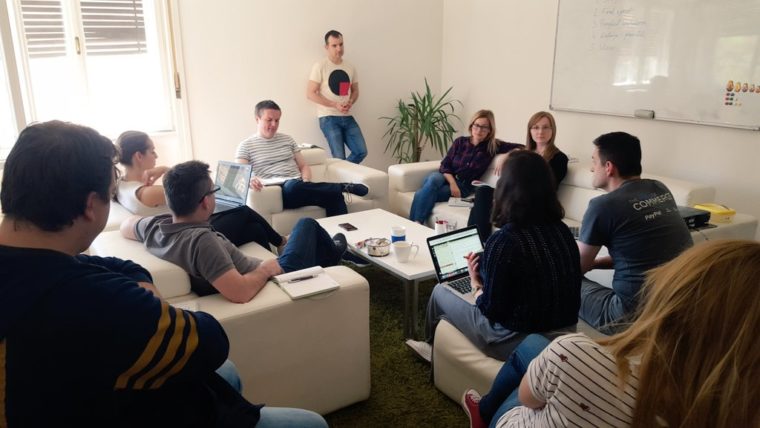 After a month and a half of Early Bird price – 90 applications! If we count in the planned speakers and people from the organization, we have already exceeded the expected attendee number! We agreed with the hotel to increase the reserved capacity, and we moved on to intensive search for high-quality speakers. We simply didn’t want to offer just another routine runaway conference, but a conference on a carefully chosen location, with an excellent lectures, with a different party and a different atmosphere every day, a fun outdoor activity (with a backup indoor plan, because of the changeable weather at the time of the conference) and more… (always offer something more)


From the end of the Early Bird period until the last week of Regular Price period, there were very few applications. Then it started again, and by that time we were aware we should expect more attendees – maybe even 200. After the Regular Price period we planned another fee increase, but when we came to 200 we have decided to stay with the regular price (it wasn’t important to earn any money from the conference, only to cover the costs). We were hoping not to exceed more than 250 participants, so that we can retain the charm and intimacy of small conferences. In the end, there were 238 participants from 30 countries and 4 continents! (know what you want)

To make arrival easier for participants, we communicated with them daily about the various possibilities to come to Opatija, we gave them information about the timetables of local buses and trains, the numbers of taxi and rent-a-car services, even helped with obtaining visas when needed. (be there for your participants)

As a part of the organizational team, 11 people were actively involved in the organization during 8-9 months period, to create a website, to perform marketing activities and sales processes, a story telling design about the motto of the conference “Lots of Code and Fun and the Sun”, to ensure desired technical requirements, to communicate with delegates, speakers, hotel, and everyone else involved in the process. It was a long and exhausting process, but then came even more exhausting Conference. 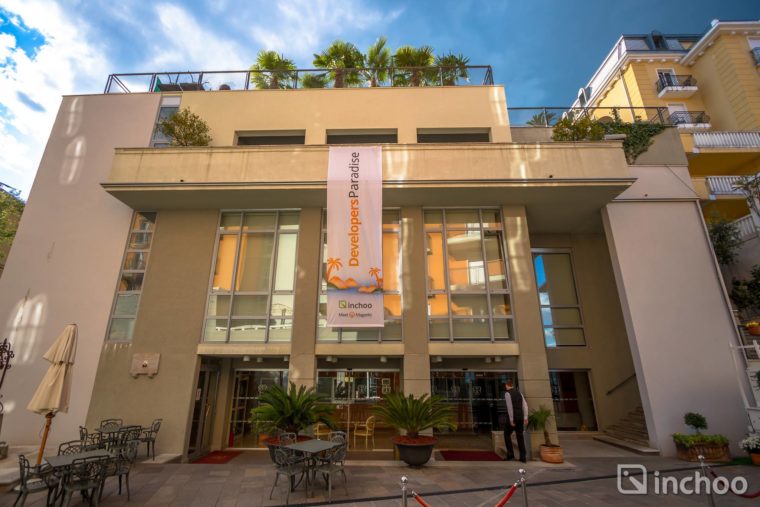 To prepare everything for the conference, few of us came to the hotel 2 days earlier and the rest of the team the day before the conference. As always, even with the best planning some things just get complicated. One of those things was that the printing company forgot to send us a conference badges along with the other material! So we had to change the plan to give participants their badges and welcome packages during the pre-conference part, and left that for the official opening instead, when we managed to receive all the materials from Osijek. (shit always happens)

For the pre-conf day we organized a hackathon, a workshop and hired a tour guide for the sightseeing for the interested participants. The response was great! For all that activities we asked for previous application, but we also allowed the on-site application, up until we reached the maximum capacities for each activity. (be flexibile)

We had no problems with the lectures. Only one lecture was canceled during the conference, due to an illness of the lecturer. All the lectures went through as scheduled and on time, with a very good attendance and the audience interested and very much involved. (quality content)

Although it was sunny in the morning, the rain was announced so we had to cancel a planned outdoor activity, a trip to an adrenalin park, and pay the agreed late cancellation penalties. Since we cancelled our trip, we didn’t need transportation any more, but due to the lack of clearly defined conditions of cancellation, we had a dispute with the agency. As we don’t like to leave the bad blood behind, I’m very glad we managed to smooth it out after the conference. (clearly define all the options during the negotiation)

#exclusive Here is something we have never published before. We planned to set up in the conference rooms an exhibition of old computers and hardware equipment from the computer museum Peek&Poke (if you are in Rijeka, be sure to visit them), with some very rare and valuable exhibits, as well as the playroom with the old games, but something came up for them and that was canceled the night before setting. It was supposed to be a surprise to participants and we didn’t announced it before, only the organizational team knew, so no one else was disappointed but us. (know what to publish)

During the conference we had a framework of duties and schedule for the organizational team, so we can all get enough rest, but we were kept by positive atmosphere and we were involved more than we actually had to, and went to sleep only when we were utterly exhausted. 🙂 All the team members were involved to the maximum and we were sure that everything will be done as planned. (good team is everything)

Reliable and well organized hotel staff plays a very important role, which was the exact case here. They were really on a high level, so we rest assured knowing they have everything covered, be it; accommodation of the participants in the room as planned, coffee breaks, meals for participants with non-standard dietary needs, logistics, preparing for parties, etc. (reliable partners) 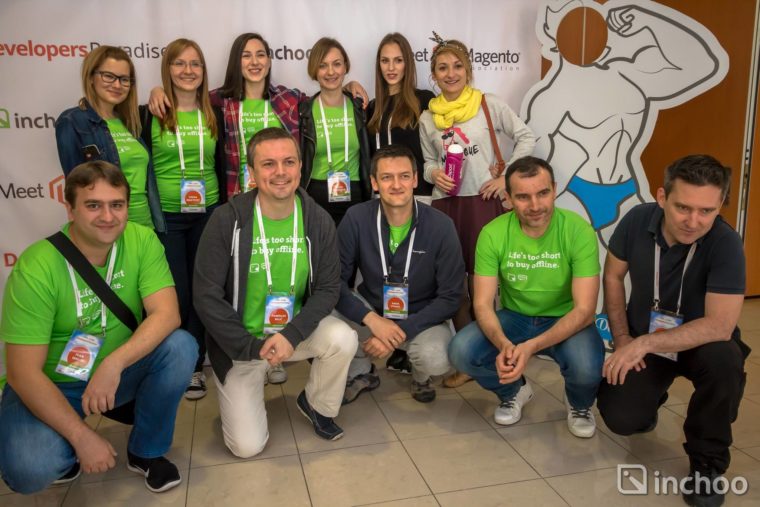 1. A good team makes for a good organisation!
2. Define the goals to know where you are going.
3. It’s important to decide who’s in charge for what, before and during the conference.
4. Location, location, location.
5. Reliable partners, clear agreements and thinking all the “what ifs” through.
6. Communication is very important, both internal and external.
7. Quality content.
8. Be aware of all advantages and disadvantages regarding location, term, team, partners, budget and so on.
9. There will always be some problems. Solve them promptly, don’t let them to escalate.
10. Be prepared for changes on the go, unexpected things will happen.

More about the conference: https://inchoo.net/life-at-inchoo/devparadise-overview/

See you at another Meet Magento conference!

Inchooers at Meet Magento Italy – here’s how it went!