As many folks that have attended Imagine conference will write a blog post about their experience, I was wondering how my blog post could differ. I don’t want to just share what was happening there, as this whole adventure is hard to put into the words and Magento has already covered it pretty well.

But let’s see what I will be able to deliver.

So, how did I end up going to Imagine in the first place?

This is, indeed, one interesting story to tell. Long story short: we, at Inchoo, we wanted to send a few people, but last minute we decided not to, as we had some organizational changes in the company. Ten days before Imagine, our client (KEH Camera) reached to Tomislav having one ticket available and we agreed I should be the one attending.

So, in this short period of time before the conference, I have started exploring any useful tips for Imagine newbies on Twitter. Pleasantly surprised there were so many helpful tips and tricks, my stress level had decreased to the minimum. Also, sometimes less time to prepare is the key to having an extraordinary time.

“How is it possible you had the courage to attend Imagine all by yourself?“ That was the question I was asked more than often, whether by my fellow workers or people I met there.

Truth to be told, I was a little bit afraid, but more excited to explore the unknown. Also, I had received a huge encouragement from our CEO Tomislav Bilić. He asked me if I was willing to travel alone and I was, at that time, a little bit indecisive, but he got me on board when he said:

“You know, I firmly believe that the best possible experience you can have there is if you are exploring it alone. My first time attending Imagine, I was all by myself, and I had the best time ever.” 🙂

The eighth Imagine conference, placed in a dreamy Wynn, is the biggest Magento conference in the world. At Imagine – everyone is there! The crème de la crème of Magento: solution partners, technology partners, developers, merchants, different 3rd party integrators and everyone else who breathes Magento to the fullest. It is a huge aggregation of people seeking business opportunities, valuable information, meeting old/new friends and having a good time while doing business they love.

Amazing to see our partner @inchoo at #Magentoimagine ❤️ pic.twitter.com/mdZxIWi7e4

This year’s topic was Lead The Charge and the Master of Ceremonies was Philip Jackson.

“Imagine is the best of us: Share your stories, set time aside to learn & experience, don’t be in a hurry” – @philwinkle #MagentoImagine pic.twitter.com/Wkor0x7vVm

He shared his inspirational journey how he had decided to do something about himself and had lost the weight he gained. It was very touching. I liked how he expressed that to succeed:

During the three-day event, there were many great stories on the general or breakout sessions shared, but there is one I particularly liked: Melissa Ben-Ishay (Baked By Melissa).

Her honest story to success stole the show, in my opinion. She lost a job she didn’t like but was very passionate about her cookies. She was surrounded by right people at the right time, didn’t know anything about eCommerce but somehow managed to become a leader in cute cookie business. The story was pure and from the heart. I could feel it.

She reminded me that passion, timing and doing what you love are key to success.

The very exciting thing about Imagine is that you’re able to hear from first hand about new features and functionalities that will come with new Magento releases.

So, it was announced that:

This must be -by far- the coolest way I've ever entered a stage!

I can’t wait to hear more about their strategy and plans.

As we were approaching the Jamie Foxx speech, people were asking how Jamie and Magento are connected all over Twitter and on Magento official forum. They were also a bit critical of him being a speaker there. So, to spice things up a little, even Aron poked a little fun at it.

As #MagentoImagine prepares for the most anticipated keynote of the day, it's good to remind ourselves of how Jamie Foxx got to this stage in the first place.

In my opinion, I was looking forward to seeing and hearing him on the stage. Also, I knew he has a Magento store so for me it made perfect sense. I was hoping he would give a little bit of a motivational speech but also he could talk eCommerce as he and his people run the business.

From the moment Jamie entered the stage, he owned it. Mark Lavelle was trying to keep up with him, but he was just too strong, doing whatever he wanted with the audience. He, firstly, is a stand-up comedian, then an actor and a singer. 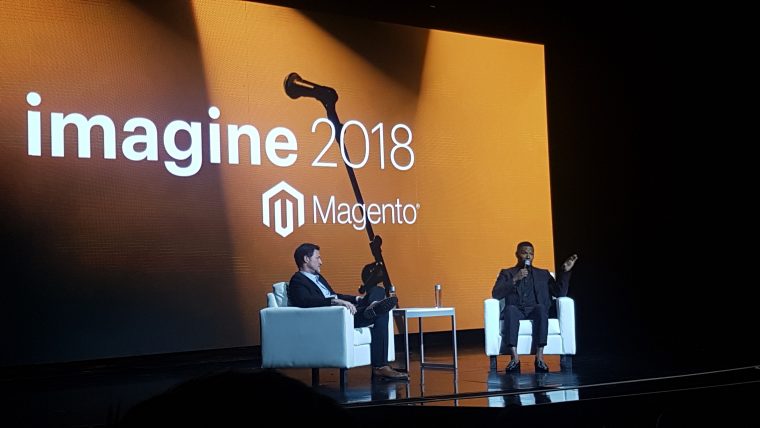 So, he did a stand-up, everyone was laughing from the heart and it was what we all needed. I don’t remember when it was the last time I laughed so loud and hard.

Jamie was an excellent choice. Even though it was supposed to be an interview one on one, it ended up being Jamie owning the room (stage). I firmly believe that if anyone had second thoughts about him, that they would have changed their mind after his extraordinary performance.

Not sure if someone has addressed this but the strong message has been sent from Imagine this year.

As a woman who is very vocal about empowering women of all kinds in my local city and above, I was positively surprised to see many female speakers on the stage this year. And I was certainly excited to hear them lead the stage. It is important that women within this community feel good and are encouraged to give a speech.

Also, I liked what, during the opening speech, Magento CEO, Mark Lavelle, said for Karen Baker, who is a big influencer on Magento community from early on.

“She is constantly helping making sure that Magento CEO is never too secure in his job.”

It was a positive comment that referred to how strong-opinion woman can shake the community up and that her voice is heard. That was the best part of his speech.

Thx for this convo, allows me to clarify my jovial comment was meant w/ upmost respect for Karen, who I consider an important, positive, dynamic leader in our community. She’s always been one of my barometers for how we are doing. Even when -especially when- she disagrees w/ me https://t.co/OHHCNIAqUR

Later on, Mark and Karen even commented on it on Twitter, making sure that if anyone understood this differently than it was presented, it was wrong. I simply loved it.

Since we all strive to be better, there is always at least one tiny little thing that can be improved. Before I say anything, I would like to say that Imagine is one of the best-organized conferences I have ever attended and I do have a number of conferences behind me.

Sometimes, I only felt like reading from the screen at the stage was too visible to the audience. It might be that the text was too small, or screen was positioned incorrectly, but it was noticeable.

This is the only thing I can see room for improvement, other than that it will be hard to top this year. 🙂

What is Imagine all about

On the very last conference day, I was sitting in the B bar at Wynn hotel with Interactiv4 CEO Ignacio Riesco and talking about all Imagine events he has experienced so far. He was telling me some funny stories and some big decisions he had made each time he attended it. Hearing all that, it changed how I perceive Imagine and its purpose.

Indeed, it is the conference where you can find valuable leads, do business, find a partner at Marketplace, hear some good speeches, exciting news and meet all those people.

More importantly, it is what you bring back home to your work, which directions you choose after experiencing Imagine, and what you bring back when you return next year. It’s about individual and its personal growth through the business. Does that make sense to you?

So, for me, from a day one to the very last day, it was an indescribable experience. And it has changed me. A lot. The time will tell how am I going to use this experience. Hopefully, in the best possible way.

To be completely honest, I left the conference with one strong thought. Next year, on the Imagine stage, I would love to see Inchooer(s). Whether giving a speech, receiving the award for the contribution or being awarded because of the enterprise case-study project. I was so happy for all our friends receiving some huge recognition, but I couldn’t help thinking how Inchoo deserves to be there too.

It is not a secret that we aren’t satisfied with where Magento 2 is at the moment. Knowing that some of the most critical bugs aren’t fixed, we have started exploring some other solutions as well. Nevertheless, Magento is still more than 80% of our projects, and I hope to see more positive changes in that direction. 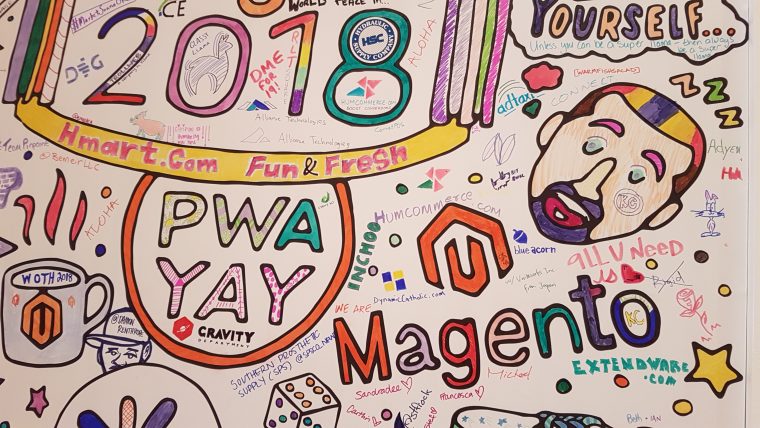 On the road again – heading off to Imagine!