For the past few days there has been some open discussions around the web professional communities about the role of forums in modern internet marketing. It appears that new marketers strongly underestimate the power of forums and look at them as an old marketing tool that will soon be extinct.

I believe forums will not be eliminated by the modern social media channels such as Facebook and Twitter. Forums have been here since mid nineties and survived many web revolutions and Renaissances. If you look at the modern social media you will see not much has been invented on the web since the appearance of modern forum software. New social media websites are in the core, nothing more then differently organized good old forums.

Chris Crum of the WebProNews wrote a nice article yesterday about forums and social media and asked for feedback. As you can see, people tend to agree that forums are still very good source of relevant traffic that new internet marketers should not underestimate.

For better visualization of what I’m going to talk about, I made this table / graph. 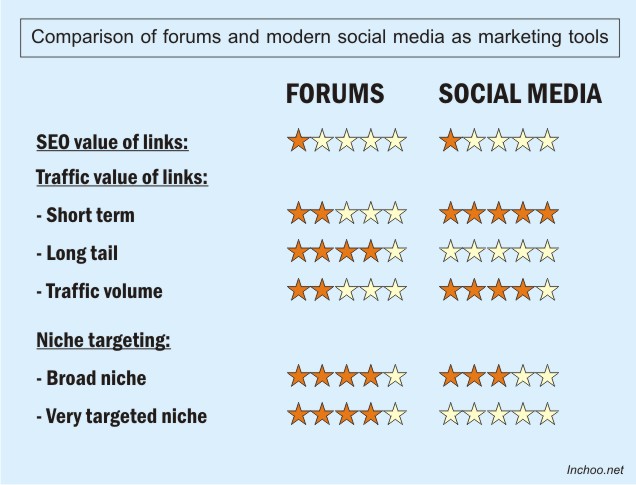 If we would assume that all this elements are actually valued the same, we could sum things up and say that forums have 17 stars while modern social media channels earned themselves only 13 stars. This leads us to conclusion that forums are still even more useful as internet marketing tool then most modern social media networks.

Both forums and most of the modern social networks have really low SEO link value. Forum links have been devalued by major search engines for quiet some time now while most social networks links are either no followed or, even worse, not indexed at all. Using these channels for SEO value is mostly only good for getting indexed but you will get *some* link juice out of it so it’s not completely negligible.

I’d still give a little bit of advantage to the forums in this paragraph as they give you a really good control over the anchors you will use for your links and also give you one really important ability, ability to change your mind. At any moment you can change your forum signatures which will automatically edit all of your life’s work on this forum and turn all your posts into the links to your new point of interest, while in most of the social networks out there you don’t have such an ability.

When we’re comparing forums to the social networks in traffic point of view, both of them have really strong and different arguments on their sides. While social networks are winner in short term traffic benefit, forums totally win in the long run. If we look at the modern social networks you will see they are really fast. Once you post a link, you will get a few hours of benefit out of it and that’s a s good as it gets. They have an advantage in general traffic volume potential so forums can’t compete with them in the short period of time. However, most of these networks are not even indexed by search engines and if they are they rank so purely, you shouldn’t expect to get any traffic from a link you posted last year on a social network, while forums have great potential to bring you low but long lasting traffic income.

Forums have been here for a really long time. This is why there are lots of broad and targeted niche forum communities out there. Social networks on the other hand are still pretty green and new in the niche markets and most of the very targeted markets are still not covered by any social networks. While you can find great social networks in broad niches such as business, you won’t be able to find really targeted social networks with noticeable community volume.

How to tame the new Google Keyword Planner?