What was one of the most wanted requests from SEOs around the world when it comes to data from Search Console? Its freshness. And Google gave it to us. But, how accurate is that data? Read on to find out what we have found out.

Data that is shown in the Google Search Console and its Search Perfomance report is very important to any Webmaster and website owners. But the problem in the past was that it was showing as 3 days old. And even a couple of days can mean the difference between a disaster and success.

In the meantime, I guess someone told Google that time is money. And that’s why Google decided to give us fresh data in the Performance report of Search Console.

The change came in late September of 2019. Now we can find data that is only several hours old (but be careful – most of the time that data is only partial. I will explain below).

Fresh data became a good thing when we think of some cases where we need fresh results. From fresh search queries to data on traffic from Search or Google Discover, it became very handy for site owners to see that information.

How to find fresh data in Search Console performance report?

Fresh data can be found in two places in Google Search Console. First, when you are in your Performance report you can check if the data on the graph is “fresh data”. There is also small information to the right that is showing when the data was last updated.

It’s important to remember that this data (shown in the picture above) is related to the whole day. If you want absolutely fresh data (if you look at the time of the update to the right), you need to do this.

Click on “Date” above the graph to choose a date range. Now you can click on “most recent date”.

And this is where you must be careful. 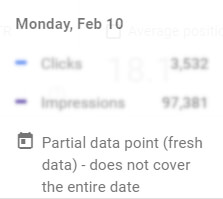 Once again, fresh data shown in Search Performance Report when looking for a “long” time range is (most of the time) not the same as choosing “most recent date”.

And if we can see complete data only after a few days – the one question that arises is: How accurate is that fresh data if we look at it today?

In order to find that out, we have conducted a small test that spanned over four months. In that test, we have collected the data from the Search Console for several domains. The data collected were clicks, impressions, and position.

Of course, for this “test” we are looking at complete fresh data (for longer time range) – not the partial one. 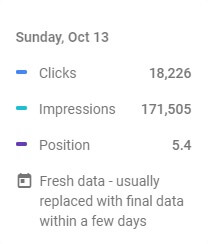 We have recorded data every day. And, just to be on the safe side, we have waited about three weeks before checking and comparing final data with the fresh one.

How accurate is fresh data in performance report?

After checking all the data from the test we have come up with two major conclusions.

The first conclusion is that data is pretty much the same. The difference is on average within just a few percentage points.

Again, the data shown above is from several Search Console accounts. Looking at those accounts on average we got:

Generally speaking, we can expect more clicks from final data and fewer impressions and weaker position.

The second conclusion is that fresher data is actually getting better and better (accurate) over time. For example, when looking at fresher data for clicks for the first month it was around 5% more. But for the most recent month, it was only around 0.75% more. 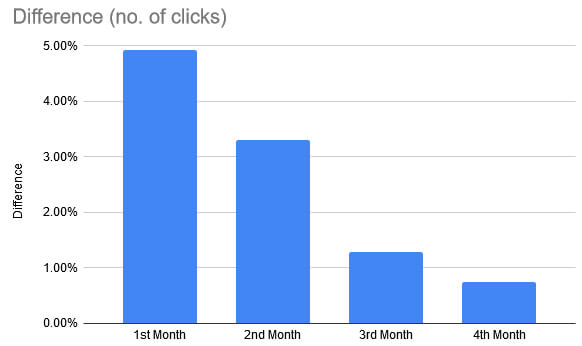 Also, there were some big fluctuations for several days during the first two months. For example, clicks were ranging from -9.32% all the way to +12.2%!

But, the important thing to remember is that data for the most recent month is pretty stable and without any big fluctuations.

As time goes we can conclude that fresh data is becoming more and more accurate. And that is a very reassuring thing.

Can we even dare to dream that Google will start to give us instant, real-time data in Google Search Console? What do you think? Comment below.